Title: To Make a King 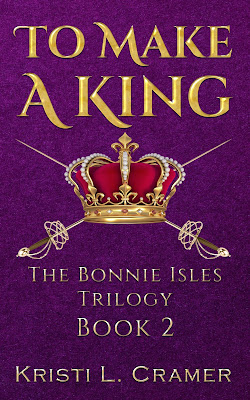 Blurb
Five years have passed since Sebastian learned of his birthright as a true prince of the Bonnie Isles. Now the king is dead, but Sebastian isn’t ready to wear his father’s crown. His whole world crumbles around him while every eligible woman in the kingdom competes for the crown prince’s attention, driving him to distraction.

Mari of Dewbury is the youngest daughter of a baron from the smallest estate in the kingdom. Between her mother and elder sister’s scheming to win the future king’s heart, and the dozens of other beauties making their play, she entertains little hope of even being seen by the crown prince, much less attracting his attention. She has only come to Fair Haven to pay her respects to King Isaiah, and perhaps catch a glimpse of the man destined to become king, but a chance encounter changes everything.

Unseen forces use dark magic to undermine Sebastian’s succession, and Edward is encouraged to take action against his half-brother in a plot to usurp the crown. Before the sun sets on coronation day, brother will face brother and swords will be bared. Will royal blood be spilled and evil reign in the Bonnie Isles? Or will love truly conquer all?

Early reviewers are loving To Make a King!
See reviews on Amazon

Mari felt invisible, as usual. No one had spoken two words to her all night. Only the servants seemed to notice her at all. Though she hated to admit it, she feared her mother had been right: her presence was a waste of time and the money she had been saving for years.
All to pay her respects to a king who had never seen her and a chance to meet the man who was to be crowned in a week’s time—along with at least a dozen other young women, including her older sister, Rochelle, who had the same general idea.

Indeed, the king’s wake had something of a circus air: all the gaily festive colors on gowns, ribbons in hair, and jewelry could belong to clowns or players. Mari nearly felt out of place in her simple, somber grey dress. But even if she owned a costume to rival those of the other ladies competing for the heir’s notice, Mari could not see herself dressing for a wake as though it were a carnival.
She had found herself standing near the door all night, unable to fit in with the prince’s unabashed suitors, both visually and ethically. But dressed as she was, she apparently blended into the tapestries, despite the strands of red hair escaping her black mourning coif.
From her position, she had watched Prince Sebastian slip away from the riot of what should be a thoughtful evening of reflection. She considered following, though even if she had gotten her nerve up, the guard at the door had no doubt been instructed to keep the prince’s privacy. And so, she had waited all night, watching for his return.
It was morning now. Shafts of sunlight sprayed through the chapel’s stained glass windows to paint the room in ever more garish colors. Mari wished the whole thing would get over with. Her feet hurt, her head hurt, and she felt foolish for having spent all her money traveling to court for a lost cause.
Prince Sebastian could pick from the flower of the Bonnie Isle’s beauties: small chance of recognition for Lady Mari, the youngest daughter of Baron Tidwell, lord of the smallest holding in the kingdom.
“Not exactly what one would envision, is it?” a man said from close by her side. Mari turned in surprise to find Lord Wingfield.  She curtsied, and he bowed in return, smiling at her. “I rather hoped our prince would be allowed to mourn his father properly. Instead, this, and he is driven from his own chapel.”
“Indeed, Lord Wingfield. I almost expect tumblers to come through.” Realizing what she had just implied, Mari felt herself blushing furiously.
The young lord smiled and leaned in close. “Don’t worry, Lady Mari, I feel the same way. It seems you are the only one who cares to show proper respect to our late king.”
“Oh, no, sir. I see plenty—”
“Let me amend that. I should have said the only young lady....”

Mari could think of no response, and knew she was blushing again. “He was a great king,” she fumbled out at last.
“Indeed.” Lord Wingfield smiled at her, but she saw sadness behind his eyes.
Mari had known Adam Wingfield since childhood, as the Greyloch Estate bordered her father’s own small estate of Dewbury. In those years, he had grown from the impish neighbor boy into the dashing son of a duke, older and wiser in the ways of the world.

He had always been kind to her. Once, she had dared to hope if her sister won his heart—which had always been their parent’s dream—she would have in him a fine brother who would care for his spinster sister-in-law. Having always been told she had no prospects for marriage, she could hope for nothing better. But he had gone away to Fair Haven to learn the art of war, and had captured and been captured by the heart of Princess Aslynn.
“Ah, look,” Lord Wingfield said. “Here comes Prince Sebastian and my wife now. May I present you?”
“Oh no, I couldn’t...,” she began, but his hand was at her elbow, guiding her toward where he stood in the doorway with his twin sister, talking quietly. Not everyone had noticed the Prince’s return, but Lord Wingfield guided her up and bowed low. Without looking up, Mari curtsied deeply.


“Your Highness, may I present Lady Mari of Dewbury, daughter of Baron Tidwell.”

The first few chapters of To Make a King are up on Goodreads and Wattpad. I'm releasing one chapter a week until it's published - so head over and check it out to see why you want to pre-order this second installment.

Buy the Kindle or Borrow from Kindle Unlimited

To Make a King is also available on Kristi's website in Mobi, ePub or PDF for discounted prices. Otherwise, it's only available on Amazon at this time, which means it is/will be on Kindle Unlimited for the first 90 days of publication. After that it will go to all markets. The price is $2.99.

Kristi doesn't know how she got old enough to say she's been writing for three and a half decades. Her Young Adult books are exciting adventures that always include wholesome life lessons. She also writes Adult Suspense with a Dash of Romance, most of which are considered "clean" - especially by today's standards.