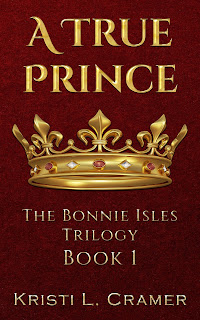 ~~ A long time ago in a faraway island kingdom, two friends discover the key to a mystery that, once unlocked, will change everything. Enemies they didn't know they had unleash magical forces to make sure the secret never comes to light. ~~

Princess Aslynn and Sebastian have been friends nearly since birth, despite their differing social status. A friendship cemented by a tragic common thread: Aslynn's mother died giving birth to her, and Sebastian is a castaway foundling, raised by the king’s swordmaster.

They lead an idyllic life until the forces of change converge on the small island kingdom they call their home.

After a storm to rival the one that brought Sebastian ashore, the two friends rescue a shipwrecked stranger. In gratitude, the traveling mystic offers to solve the mystery of Sebastian's origins, but as the stranger uncovers clues, events surrounding his arrival stir up more than just the past.

A True Prince is a complete story arc, and does not end in a cliffhanger.

Master Jabari moved to the fireplace, opening a wooden box to remove an ornate pipe, which he loaded with tobacco from a clay jar before lighting it with a taper from the fire. Smoke puffed from around the pipe stem as he settled down in his chair by the fire.
The trio exchanged glances and smiles. A pipe always meant a story. They settled onto the rug in front of the blaze, ready to listen.
For a moment, all they heard was the storm raging outside, and Aslynn watched the flames jump in the fitful breeze blowing down the chimney. She was glad to be here in such company, warm and comfortable, rather than shivering in her bedchamber, alone and bored.
“It’s fitting that a storm should blow tonight,” Master Jabari said, and Aslynn turned to see him staring thoughtfully over the top of his pipe.
She and her friends waited, knowing it would do no good to try to rush things. The old military man had a hundred stories to tell from his years in service to King Isaiah. There was the romance of falling in love with Princess Bette, who gave up any claim she might have to the crown out of the knowledge that the kingdom was not ready to have such an obvious outlander anywhere near the throne. Then there were the stories of his youth on the far off shores of Egypt, his native land, not to mention the roundabout journey to the Bonnie Isles as a captive on his way to a life of slavery.
Master Jabari had explained more than once that in the tradition of his people, he told the stories to the children as a matter of oral history, so that they might pass them down to their children. Aslynn didn’t think so seriously about the future, but found them a good night’s entertainment.
“Fifteen years ago, there was a storm such as this, on this very night. The wind raged all night and the rain fell so hard it beat trees to the ground. Every roof in the castle sprang a leak.
“The next morning, King Isaiah and I went riding on the beach with the salvage crews, to see what the sea had given us. You see, the sea may give us our harsh weather, but she always leaves us her bounty when the wind and waves calm.”
“Tonight was the night...?” Aslynn began, and Sebastian hushed her.
“Tell us the story, Master Jabari?” Adam asked respectfully. Aslynn knew he hadn’t heard this story yet, but she and Sebastian could hear it a hundred times more and never tire of it.
Jabari stroked the whiskers on his narrow chin. “King Isaiah and I rode the beaches, and it wasn’t long before we saw the frigate, her back broken on the reef they call the Devil’s Jaw.” He took a moment to puff on his pipe, and Aslynn imagined his absent gaze reflecting his memories of the sight.
“The reef had called another ship to the bottom of the sea. There were bodies in the surf, and they told a story that would never have come from lips still breathing life. Bodies still chained to pieces of the ship, as well as a drowned man known to be a slaver—the first mate of a ship known as the Swing Trader. The frigate’s captain had tried to leave their secret port under cover of the storm, knowing if they were caught on the Bonnie Isles, they would be tried as the criminals they were.
“Well, the sea delivered her own justice, taking all the poor souls who had been slaves home to her as well. All save one.”
Aslynn clapped her hands in delight, knowing who that one soul had been.
Master Jabari smiled and continued. “Amid all the wreckage, the king found a sea chest. An airtight wooden box made to float, such as those used by sea captains to hold their ships logs or special belongings. Well, there was certainly something special in this one.”
“Sebastian!” Aslynn laughed, and the boy in question gave her a playful punch on the arm.
“It was the oddest thing,” Jabari continued, looking thoughtful. “King Isaiah saw the chest floating in surf still rough from the storm, and instead of asking me or one of the other searchers to fetch it, he went after it himself.”
“Do you think he heard 'Bastian crying?” Aslynn asked—as she always asked.
“I could hardly hear myself talk over the roar of waves and the cries of the gulls scavenging the corpses. But the king, he must have heard something. He came back to shore dripping wet, with the chest in his arms. He set it down so gently in the sand...” Master Jabari pantomimed the gesture, and even now, wonder lit his weathered ebony features, “and pried open the latches.
“I was nearby when he did it, and though I don’t claim to be a mystic, I know magic when I smell it. There was a spell on that chest, to keep its contents safe.
“Inside, nestled in blankets and snug as you three are tonight, was a baby boy, with eyes the color of the sea.”
Aslynn knew those eyes better than her own—the green of sunlight shining in the surf, or the froth of the waves after a storm. She always thought it was funny others called them blue.
“The king and I brought him home to Castle Fair Haven, and though we inquired, no one reported losing a baby. King Isaiah entrusted the care of the babe to Mother and myself, and gave him the name Sebastian, boy of the sea.”
“But where could I have come from?” Sebastian asked, sounding upset by the story this time. “Don’t I look like anybody? I was more than ten months old, surely someone had seen me before the slavers took me....”

You can read the first 9 chapters of A True Prince FREE!
Check them out on Goodreads or Wattpad.

Buy the Kindle or Borrow from Kindle Unlimited


A True Prince is also available on Kristi's website
in Mobi, ePub or PDF for discounted prices.

Kristi doesn't know how she got old enough to say she's been writing for three and a half decades. Her Young Adult books are exciting adventures that always include wholesome life lessons. She also writes Adult Suspense with a Dash of Romance, most of which are considered "clean" - especially by today's standards.