Review of Shadows for a Princess, by Dominique Kristine

In short, this is an awesome read. 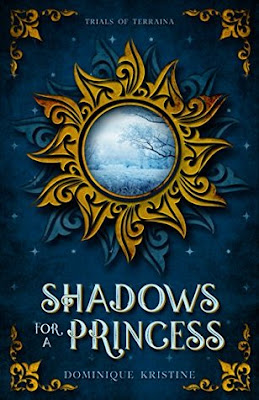 This is a fabulous story, with politics and intrigue, knights and ladies, spies and villains, set in a fully realized fantasy world. There are several plotlines interwoven around the main plot, all seamlessly tied together. The reader doesn't just hear about Geoffrey & Ysolde, but a whole cast of characters who are so well drawn I felt like I knew them personally. They took me off into the Hinderan winter cold but kept me warm with the suspense of trying to figure out what's going on and what's going to happen next.

I love the strong women in this story. Ysolde is strong, compassionate, wise, and fierce. She takes no crap and gives no...cares from the people who plot against her. Yet she shows loyalty and love for those she cares for. She is no wilting flower waiting to be rescued, yet she has no qualms about asking for help when it's needed.

Then there is Raennia. What's not to love about a woman who can compete with the finest swordsmen to become one of the elite guardians of the Princess? Rae kicks ass. She is a fine, complex character, and one of my favorites from the whole story.

The men are my idea of perfect men, too. Geoffrey makes me want to find a knight of my own. He's strong, kind, caring, just a little clueless when it comes to women - just a tad! Andras, Etienne, and Laurent all give me a case of the swoons.

The bad guys are also well drawn, and a diverse cast of characters there, too. I don't want to give anything away, so that's all I'll say about that.

I don't know what else to say about this that won't end up with spoilers or me just gushing and babbling my love for this story, so I'll conclude by saying READ THIS BOOK - you won't be sorry.

KC's Content Rating:
I would rate this PG-17 to Mild R, for the violence and adult content.


The language is very clean without being Victorian or oddly stilted (except for one character who is just learning the main character's language.) There is violence, but I don't think it's horribly graphic. A mention of blood and throats getting slit, some off scene torture, but it doesn't go into details.

There are a couple steamy scenes where the door isn't quite shut, but I wouldn't call them graphic. (You can tell what's going on, but there are no detailed descriptions - more like 'he moved here, and she gasped' kind of stuff.)